After nearly 70 years in the trade (20 plus years with Graham Browne), Harold Gellar has decided to retire at the age of 93, with the commute rather then the actual work the main reason behind the decision. Harry says he classes the start of his tailoring career when he used to help his father (who was a military tailor) at the age of 14, cutting out wadding and chest piece’s ready to be fixed to the canvases and did so until the great depression in the 1930’s where he briefly changed profession and worked as a draughtsman for aircraft company DeHaven.

After returning back into tailoring, this time as a coat maker he was again forced to put the trade he loved on hold, this time for the war where he was driving tanks in Egypt. Once the war finished he went back to work with his father making tunics for Gieves & Hawkes and Dege & Skinner in Savile Row and even made a tunic for King George VI. After that he went on the be a coat maker for Johns & Pegg, who are now Davis & sons again in Savile Row before doing the same for Graham Browne until he was 70 when he retired, for a week. “I didn’t know what to do with myself,” says Harry, so came back to work for Graham but this time making baste fittings and has done so to date.

All the regular customers will know that Harry is a great character who always has a story to tell and sometimes people use to pop in the shop just to sit and chat to Harry for a while. For a retirement present we framed the shears he used to use, which were his fathers and hopefully its an ornament that can stay in the family though generations. 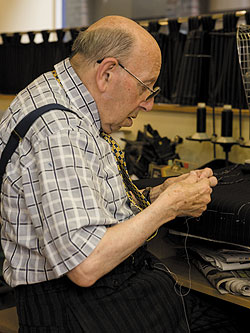 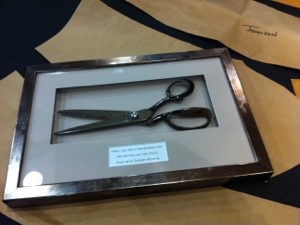 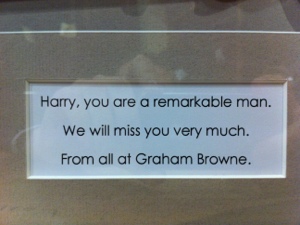